When tourists visit places, what is the next thing they crave for after sightseeing? Well, it is nothing but food. Food comes next on the list when one goes to a new place. People love to eat and people love to try new cuisines especially the ethnic local dishes. Guwahati, the gateway to northeast India, is an upcoming tourist town. With the tourism sector, getting a mammoth boost in the north eastern part of India, restaurants have also come up to give the best food to the tourists as well as the locals.
If we consider the quantity, then the number of restaurants in Guwahati has certainly gone up. The restaurants here range from bars to cafes to takeaways to ethnic. And here we will talk about the ethnic food restaurants in Guwahati. The ethnic cuisine of the Assamese people definitely deserves an introduction before you visit the state. 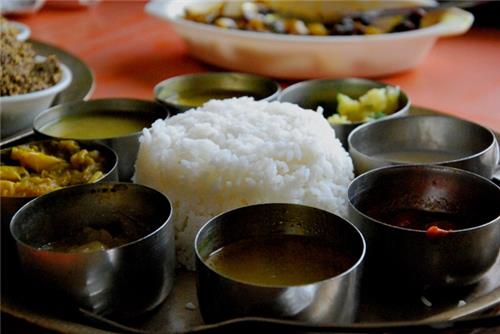 The ethnic Assamese cuisine is devoid of much oil and masalas and has its own special flavor. The taste that the Assamese cuisine brings is that of exquisite nature amalgamated with the flavours providing delight to the community since ages. In the city of Guwahati, ethnic restaurants which provide traditional Assamese dishes are found in plenty.

One of the oldest ethnic restaurants of Guwahati, Khorikaa is a favourite amongst the people for it serves the best ‘homemade Assamese food’.

Another restaurant offering some amazing ethnic food, this restaurant not only offers Assamese ethnic thalis but also dishes of the Mising Cmmunity.
Address:
Near Dispur Hospital,
Below Flyover,
Ganeshguri,
Guwahati
Phone number- 0361 2233402

A famous restaurant in Guwahati, Paradise tops the list of ethnic restaurants in Guwahati owing to its delicacies. The place is known more for its affordable yet yummy thalis.

Jutire Akhaj meaning ‘an appetizing meal’, is a restaurant located in Beltola near the state capital, Dispur. This restaurant offers ethnic assamese food which is mouth watering as well absolutely pocket friendly.

This is a chain of restaurants in Guwahati which is located in different places across the town. It is a hit amongst the office goers for it provides great Assamese thalis at reasonable prices which successfully satiates one’s hunger completely.

Bamboo Shoots, one of the most important ingredients of Assamese cuisine which has its own aroma is a hit amongst the people here. This restaurant, cleverly named offers brilliant food to its customers with best rates.

Paakghor, meaning ‘kitchen’ in Assamese is a restaurant meant for people of all groups from students to adults. The food here gives one the essence of the Assamese kitchen and leaves an everlasting yearn for taste in the tongues.

The new restaurant in town, N.E. Food Express is uniquely designed like a train coach to give the feel to its customers that they are having food in a train! With this interesting concept, the restaurant provides ethnic food not only to Assam but to different other places like Mumbai, Gujarat, Rajasthan, etc. The place is definitely worth a visit.

One of the most sought after restaurants and bars in Guwahati, Ambrosia deals in wonderful buffet services which include Assamese buffet as well. The specialty of this restaurant is that from time to time, they offer different buffet which are not only gratifying but even a run for the belly!

A visit to these restaurants would not only satiate the need of ethnic Assamese food but also make you want to crave for more. Guwahati is a developing city and hence with the passage of time, the city tends to bring many more restaurants to tickle the taste buds of the locals and the tourists as well.