Nehru Park is one of the most famous parks in the city of Guwahati. The park, which is located in Panbazar area of Guwahati, is named after Pandit Jawaharlal Nehru. The 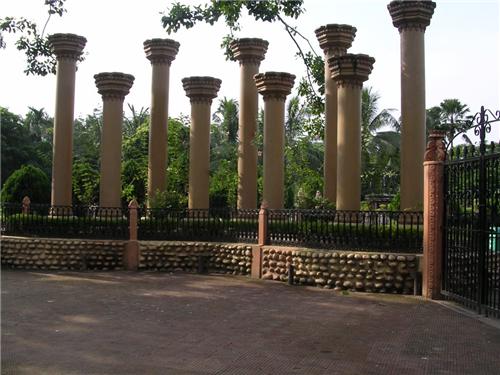 park has different sections including an open arena with an open air theater, a children’s’ park, an area showcasing various cultures of Assam in form of concrete statues and a musical fountain. There is also sitting arrangement across the park for people to sit on. The park also has a greenery maze built with thick bushes for the people to enjoy. There is also a cafeteria in the park for people to buy and have food.

The children park has a number of swings, rides and other playing tools for children and alongside there is a musical fountain which is played at intervals to different beats of music during evening time. The concrete status can be seen at the entrance of the park which depicts different cultural forms and dance forms of Assam like the Bihu dance, Deodhani dance and Jhumur dance among others.

Shraddhanjali Kanan is another newly constructed famous park in Guwahati. The park is a beautiful one with many recreational features. One of the important attractions of Shraddhanjali Kanan is the musical fountain which plays in the evening. The fountain sways to beautiful music and different light forms and displays are created by the fountain. The musical fountain plays for the whole evening until the park closes.

The famous Dighalipukhuri tank also has a children's park and nature park where tourists can come and enjoy the beauty of it. The park is adorned with lush green trees across the boundary of the park to add up to its beauty. There are also benches and sitting arrangements in the park for people to sit on.