Navagraha Temple is situated at Guwahati in Assam. It is situated in the south eastern part of Guwahati atop the Chitrasala or Navagraha hill. The temple is also known as the abode of Surya. The Navagraha temple is dedicated to the nine celestial bodies which is called Navagraha in Hindu mythology.

The Navagraha temple was built by Ahom ruler Rajeswar Singha, son of Rudra Singha in the late 18th century. During a devastating earthquake in Assam the temple was partly destroyed. However, it was later rebuilt, a few centuries later. A tank was excavated to provide water to the devotees who come to pay homeage to the Gods The tank, known as Silpukuri till date continues to supply water to the needy. The Garbhagriha, built of bricks, exists till this date. 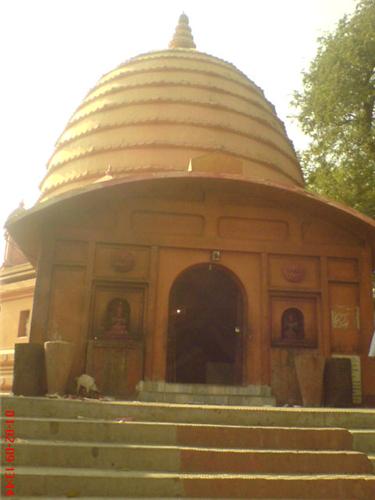 The Navagraha temple is an important religious spot of the Hindus. In Hindu religion the nine planets are considered as gods and are worshipped by people. In the temple there are nine shivalingams. They represent the nine celestial bodies. These are covered with coloured cloths representing the nine planets. There is a Shivalingam at the centre which symbolises the Sun.

The nine planets are Surya (Sun), Chandra (Moon), Mangal (Mars), Budhan (Mercury), Vrihaspati (Jupiter), Sukra (Venus), Sani (Saturn), Rahu (North Lunar Node), and Ketu (South Lunar Node). These Navagrahas are arranged in a circular mode. The temple’s roof is shaped like a dome. It is constructed in the beehive style.

One of the very significant aspects of the temple is that it is the centre of astrological and astronomical research.

The best time to visit the Temple is  from, the months of November to March. The temple for the devotees is open from dawn to dusk.

How to reach Navagraha temple

There are number  of eateries  in and around Navagraha temple. Following are the names of restaurants near the temple (within 2 kms):

Places to visit near Navagraha temple


Explore more about Tourism in Guwahati