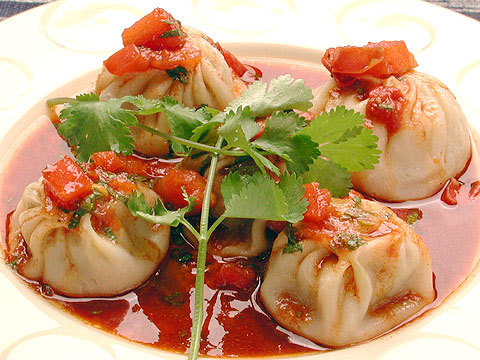 You will find very few in Guwahati who doesn't like momos. Infact so much is the crave, that if you are visiting your friend for the first time in Guwahati, then one of the delicasies that you would be treated to without fail is momo. Yes this is the aura of momo! The people of Guwahati are known for their love for momos. It is almost next to impossible to find a person in Guwahati who does not have a craving for momo. Momos are sold here right from the 4 star hotels to the restaurants and to the streets. And as such if it is the momo of Momo Ghar then there would be no one who would say a “No” to it. Momo Ghar is a legendary momo restaurant in Guwahati known for the taste and quality of the momos served there. It is very popular among the youth and is a common hangout place for the Guwahati people.

The Momo Ghar was originally known as "Pirish". Founded by Tapan Kr. Barua in 1991 this was the first momo restaurant in Assam. Originally the concept of momo was brought from Shillong, Meghalaya but it was later improvised and given a new “avatar” to suite the taste bud of the Assamese people. Momo Ghar is said to be famous for selling authentic momos in Guwahati.

The kitchen secrets of Momo Ghar are not really secrets as the momos here are made the same way any restaurant makes momos. But the momo recipe here is unique and splendid. The momos are made with just a minimum usage of ingredients but the taste is very authentic. Momos here are prepared very hygenically. The main USP of Momo Ghar is that a minimum amount of meat  is ensured in each momos. The momos here are given a new Assamese flavor which is relished by all. Generally the ethnic momo is made of "Keema" meat  but in the Momo Ghar momos are made of raw pieces of meat boiled and mixed with “masala”. A minimum of 4 pieces of meat is ensured in each single momo and that is the USP of Momo Ghar. Momos are boiled and steamed and not a single drop of oil is used. The stuffing inside the momos consists of fresh onions and meat pieces. The momo is served with “chutney” which is prepared with a mixture of red and green chili.


Variety of momo in Momo Ghar

Momo Ghar offers a variety of momo to its customers.The rates here are also so reasonably fixed that you can go on having one momo item after the another. Once you have tasted momos of momo ghar there would be no stopping and you bet, it would be difficult for you to like momo of any other place. Some of thevarieties are:

Momo Ghar has opened a chain of restaurants. It has 6 branches in Guwahati.