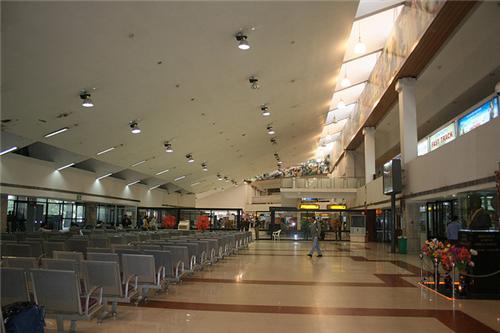 The Lokapriya Gopinath Bordoloi (LGB) International Airport, popularly known as Guwahati International Airport or the Borjhar Airport, is the only international airport of the NE States of India. The airport is named after Gopinath Bordoloi, the first Chief Minister of Assam after independence and a freedom fighter. It is managed by the Airports Authority of India and also serves as the Indian Air Force base. The airport is a major hub for flights to the entire North-East India, which is known as the Seven Sisters or the Nine Perfect Jewels.
The helicopter services are also operated from Guwahati airport to Shillong which is covered at 30 min, to Tura at 50 min, to Naharlagun (Itanagar) and to Tawang at 75 min by a helicopter service called the Pawan Hans.
LGB International Airport
Airport Road, Borjhar
Guwahati - 781015
Phone: 0361 2841909
Fax. 91-361-2840406

There are regular bus services available to Guwahati airport and is the lifeline for people in Guwahati. Apart from the various private bus services, there are also government buses and Guwahati Airport Buses which are very much popular and are commonly used by the travelers. Hence if you are planning for a trip to this fascinating city of Guwahati then it is highly recommended to pre-book your bus tickets as per your convenience, to have a comfortable journey.

There are various flights operating to and from Gauhati to major cities around the country and abroad. Following are the list of places that one can fly from Guwahati: