* In case of any delay in receiving the OTP, you may verify it later. Please proceed without verification.

Your mobile number is not registered with us. Please register your mobile no.

Situated on the northern banks of the Brahmaputra river, on the foot hills of Chandrabharati hill, the Doul Govinda temple is one of the most important religious spots in Guwahati, Assam. The presiding deity in the temple is Lord Krishna. This temple is one of the most revered shrines of lord Krishna in Guwahati. There is a Namghar (Assamese place of worship) in the temple premise. The Doul Govinda temple is also known to possess immense scenic beauty. Many tourists come to visit the temple and offer their praying to Lord Krishna. 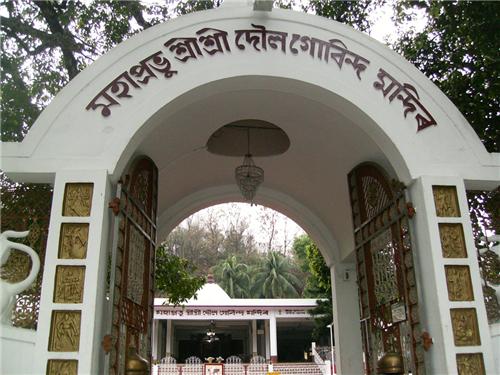 It is said that one Ganga Ram Barua of Nalbari brought the idol of Lord Krishna from Sandhyasar- a secluded place near Nalbari and installed it in Rajaduar. He used to perform regular "puja" and “archana” in the temple. From that time onwards regular “puja” and “archana” is performed in the Doul Govinda temple and the festival of Holi is celebrated here. The first original structure of the temple was built over a hundred and fifty years ago and it was again renovated in 1966. Presently, the Doul Govinda temple is managed by a committee of 25 members.

Daily worship of Lord Krishna takes place in the Doul Govinda temple. The worship in the temple begins with the opening of the temple at 7 am daily. The idol of lord Krishna is bathed with traditional rituals and practices followed by “archana”. Devotees start coming to the temple after the opening of the temple to offer prayer to the lord. The process continues till the end of the day. The temple doors are closed for a period of time during noon for offering “bhog” to the lord which is followed by distribution of the “bhog” to the devotees in a hall. In the evening “Arati” is done of the lord singing devotional songs.

For any information regarding the Doul Govinda temple the following can be contacted:


How to Reach Doul Govinda Temple

Special ferry and steamer services are available from Fancy Bazar Ferry Ghat in Guwahati to the temple. This is the fastest means to reach the temple.