Dipor Beel situated in the southwest part of Guwahati, is a freshwater lake. The lake is considered as one of the largest lakes in the Brahmaputra Valley. In Assamese, ‘bil” means lake and hence the name Dipor Beel. The name Dipor Bil, is derived from two words which are ‘dip’ and ‘Beel’. ‘Dip’ is the Sanskrit for elephant and ‘Beel’ is the Assamese for lake, so both combined makes it Dipor Beel. The reason behind the use of elephant for naming the lake is that in ancient times, lakes used to be the dockyards for the Tai Ahoms and Mug Hals.

Dipor Beel is primarily a major attraction because of its exotic variety of birds that can be found here. 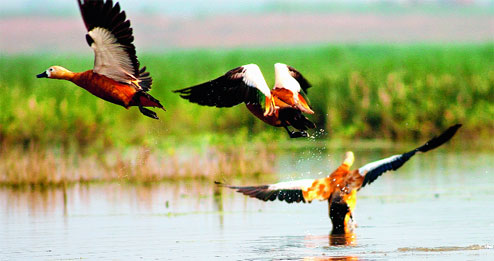 The winter season is the best time to visit the place and witness the mesmeric sight of birds present all around the place. As many as 19,000 different kinds of birds can be seen in the place in just one day! Amongst the different species found in Deepor Beel are also a large number of globally threatened species which fall in the category of endangered species. Considering the density of birds in the place, the Birdlife International has declared the place as an important Bird area. In the year 1989, of the total area of Dipor Beel, 4.14 sq.km was declared as a bird sanctuary by the Assam government.

Dipor Beel situated 13 kms in the south west direction of Guwahati can be located in the southern bank of the river Brahmaputra. The exact geographical co-ordinates of the Dipor Beel is 91° 35’-91° 43’ east longitude and 26° 05’-26°11' north latitude. The Assam engineering college is located to the north of the lake and the NH 37 borders the east and north-east part of the lake. The north and the south of the lake is bounded by highlands. The backdrop of the Dipor Beel is formed by the Rani and the Garbhanga Hills. The primary sources of the lake are the Basistha River and the Kalmani River and apart from that rainwater also acts as one of the sources.  It must also be known that the Dipor Beel is an abandonment of the Brahmaputra river system. 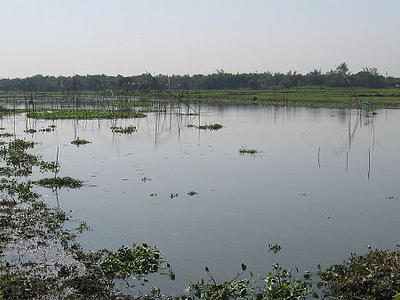 Dipor Beel and Its Climate:

The temperature of Dipor Beel has very high humidity. The weather here remains moderate and dry throughout the year. The climate of Dipor Beel is known as the Meso-thermal climate. The winter period witnesses the reduction of the size of the lake and it is during this time that the shore area is used for cultivation. Furthermore, the temperature of the lake keeps shuffling between 10.6 degrees and 32 degrees. The rainy season makes the place wet with heavy rainfall.

Dipor Beel and its Biodiversity:

The fauna and flora of this place is so huge and so varied that a lot of research work have been done here by wildlife researchers. The area is a home to a lot of endangered species of birds which are rare as well. Under Burma Monsoon Forest biographic region, the lake is categorized as the representative of the wetland type.

Research has found out that 18 genera of phytoplankton can be found in the area. Some of the names of the aquatic plants found in the area are Eichhomia crassipes, potamogeton crispus, ottelia alismoides, hydrilla verticillata, lemna minor, pistia stratiotes vallisneria spiralis, and ipomoea reptans. A very rare kind of water lily, known as the Euryale ferox found in the lake is said to have earned revenue for the government. Apart from the plants, fauna and flora, other types of aquatic plants, orchids and other medicinal plants are also found in the lakeside.

The freshwater fish found here is a source of income for the people as well as food. Large number of fish are found here. It is also used as a waterway for transportation of the villagers from highway to the southern boundary.  During the winter season the lake is used for the purpose of cultivation since the size of the lake gets reduced.

The Dipor Beel is managed by the Forest Department of the Assam Government.  The functional authority here is the Fisheries department. On the other hand, there is the Birds Sanctuary which is responsible for conservation of the birds of the lake. Since a major species of the birds are on the verge of extinction special care has been taken in terms of the birds surviving here in the Lake.

The site has been recognized as a Ramsar Site by the Ramsar convention in order to take proper conservative measures. In this part of the area, shooting for pleasure and trapping has been prohibited. For effective bird watching by the tourists, towers have been built. This has resulted in more and more tourists.

The best time to visit Deepor Beel is from October to March.