The famous Aswaklanta temple is located on the banks of the mighty Brahmaputra in North Guwahati. The temple was built by King Siva Singha in the 1720 A.D. King Siva Singha, one of the Ahom rulers, have built some of the biggest Hindu temples in Assam which also includes the Shiva Dol located in Sibsagar. There are two temples located in the premises of the Aswaklanta temple. One of the temples is situated on the foot hill and another located on the top of the hill namely the Kurmayanardan and Anantasayi respectively. 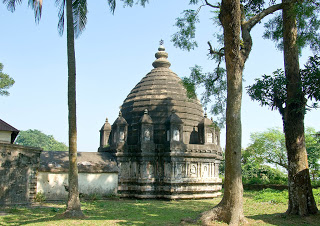 The location of the Aswaklanta temple holds great importance as many legends surround the existence of the temple. According to one of the legends, when Krishna was riding on his way searching for Narakasur to kill him, Lord Krishna’s horse felt tired on the place where the Aswaklanta temple is situated. In Assamese language, Aswa means ‘horse’ and Klanta means ‘tired’. And as such, the place came to be known as Aswa-Klanta.

According to another legend, horses which belonged to warrior Arjun were persuaded in this place to stay back away from the battle scene so that Abhimanyu could be killed. It was a conspiracy in war and was called ‘Abhikranta’ in Assamese. From this word, the place where the temple is located was named ‘Aswa-krata’ which later became Aswaklanta in popular language.

The historic Aswaklanta temple provides scenic view of the mighty Brahmaputra to the tourists with the Guwahati city in its background. The mighty Brahmaputra with the distant city at its backdrop provides a mesmerizing view when the sun rays reflect in the eaters below. The Aswaklanta temple once got damaged in the great earthquake of Assam which occurred in the year 1897 and was repaired and renovated under the supervision the then Viceroy of Assam, Lord Curzon.

In earlier times, there was a Kunda (a place of sacrifice) near the Aswaklanta temple. It was however, eroded by the Brahmaputra River and no more exists in the temple premises. The temple consists of two images, one of Lord Janardana and other of Lord Anantasai Vishnu. The Lord Anantasai Vishnu image is a fine art specimen dating back to the eleventh century. The temple body has beautiful stone inscriptions on them.


How to reach Aswaklanta Temple