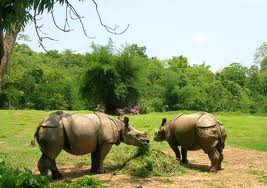 The zoo occupies an area of 130 hectares and the botanical garden in the zoo is spread across over an area of 82 hectares. The zoo comprises a unique diversity of varied flora and fauna species preserved in it.

The vegetation of the Assam State Zoo is a mixture of tropical moist deciduous forest and semi evergreen forests. The physical features of the zoo are formed with hilly terrain with a plateau on the middle and slopes alongside the plateau. One can also see bamboo forests with teak plantation and shrubs inside the zoo. 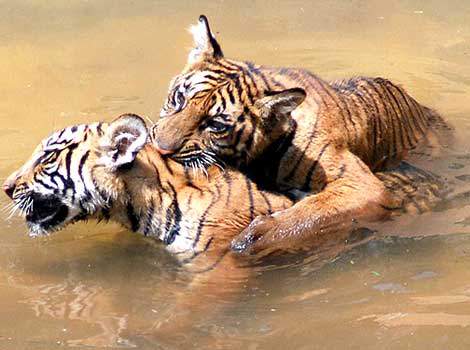 lion are found in the zoo. Apart from that, other animals like the royal Bengal tiger, stump-tailed macaque, Hollock Gibbon and the Himalayan black bear can also be seen in the zoo.

There are also a wide variety of avifauna and indigenous reptiles in the zoo. The zoo consists of around 358 reptiles, 37 animal species in the mammal section and about 277 kinds of birds.

The Botanical Garden of the Guwahati zoo is one of the major parts of the Zoo. The botanical garden was established in the year 1982 and has varied species of plants and orchids. Of them, there are around 44 species of orchids from the north eastern region of India itself. There can also be seen different flowers, broad leafed plants, different herb species and shrubs in the botanical garden.

For children, there is a park for children in the zoo with lots of recreational tools. In addition to that, there is also a forest museum, lake, tower house and a joy ride point among others for the tourists to enjoy. A reptile house having different species of snakes in individual enclosures can also be seen in the zoo. There are also eating outlets and fast food corners along different parts of the zoo for tourists to buy and have food and snacks.

How to reach Assam Zoo:

The Assam State Zoo is one of the most frequented tourist places in Assam. The zoo records an annual approximate average of 5 lakhs visitors per year. The zoo, which is located in RG Baruah Road in Guwahati city, is easily accessible for the people. The Guwahati Railway Station is located at a distance of around 8 kms away from the zoo.

The Lokpriya Gopinath International Airport, the only airport in capital city Guwahati is located at a distance of around 25 kms away. Tourists can also get buses, trekkers and auto rickshaws which are easily available for convenient commuting to the Assam State Zoo.