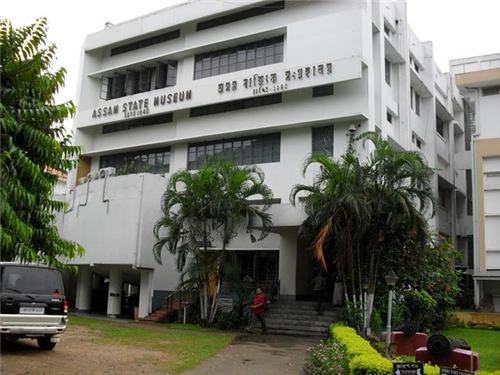 The Assam State Museum in Guwahati is one of the biggest multipurpose museums in the entire northeast displaying the iconography, numismatics, epigraphy and archeology in Assam. It is situated in the heart of the Guwahati city at the southern end of Dighalipukhuri. The museum exhibits a large collection from the historic and prehistoric time and is operated by the Government of Assam.  It has a large collection of sculptures, with the upper floors being devoted to the informative culture displays of the tribal.

There is also a small Cottage industry museum located inside the premises of the Assam State Museum, which falls under the administration of the Industrial Department of Assam. The cotton industry museum displays colorful items from the indigenous craft and art and Satriya culture.

The Assam State Museum was founded by the Assam Research Society in the year 1940. It was set up as a centre for preservation and collection of the archeological memorabilia. The museum’s main motto is to preserve the rich culture of Assam.

The Assam state Museum serves as the source of the history of Assam, it preserves the rich cultural heritage of not only Assam but of the entire seven Northeastern states. The tribal materials and objects that are displayed inside the museum, depicts the lifestyle of the tribal people. The rare and amazing specimens of the Ahom dynasty who ruled over Assam for several years are well preserved and are the most important collections of the museum.

Statues, equipments and varied articles are kept in display at the museum which again portrays the rich Assamese culture and heritage. Bell metal objects, pith, terracotta, ivory paintings, tribal objects, stone sculptures costumes of earlier times, woodwork are also some of the important things that are preserved in the museum. The stone sculptures date back to the thousands years old. The arms, weapons, ammunition of varied types costumes of royalty, utensils relating to Assamese culture  and those that were used during Ahom rule are still well preserved and displayed in the Assam state Museum.

There are copper plate inscriptions, metal sculpture paintings, stone and ancient coins also preserved in the museum. The Assam State Museum also has a library that was established in 1985; the library has a collection of various books, periodicals and journals relating to culture, art, mythology, encyclopedic work, the Asiatic Society journals, biography and lots more.

The bank has also very well preserved the collection of paintings of the age old illustrated manuscripts of Sanchi Bark and has also the distinction of conserving the rare and special monuments of World War II.  There are some reconstructed tribal huts inside the premises of the Assam state museum and one can also take a walk through these homes and examine the structures. It also has a display of musical instruments and weaving in the museum.